The OODA Loop is a decision-making framework that we have found increasingly helpful to solve a variety of problems and give leaders a methodology for making decisions quickly. The concept was developed by Air Force Colonel John Boyd, one of the great strategists of modern times. The framework emphasizes speed and agility while looking for opportunities in uncertainty. As the pace of banking innovation speeds up, the OODA Loop, and its supporting concepts, can help a bank’s management team have a common framework to make decisions faster and more effectively. In this article, we highlight the framework and show its power.

The History of the OODA Loop

By the late 1950s, John Boyd was regarded as the best fighter pilot in the world. His nickname, “40-Second Boyd,” came about as he usually only needed 40 seconds of dogfighting to defeat his adversary. Part of his competitive advantage was the micro-second speed in which he made critical, life-or-death decisions. Despite being one of our most significant military operators, he was well versed in philosophy, science, history, psychology, and strategy. He is regarded as one of the best military strategists the world has known up there with Sun Tzu, Genghis Khan, and Napoleon. Of the many concepts that he institutionalized, one of his first was the OODA Loop which stands for: 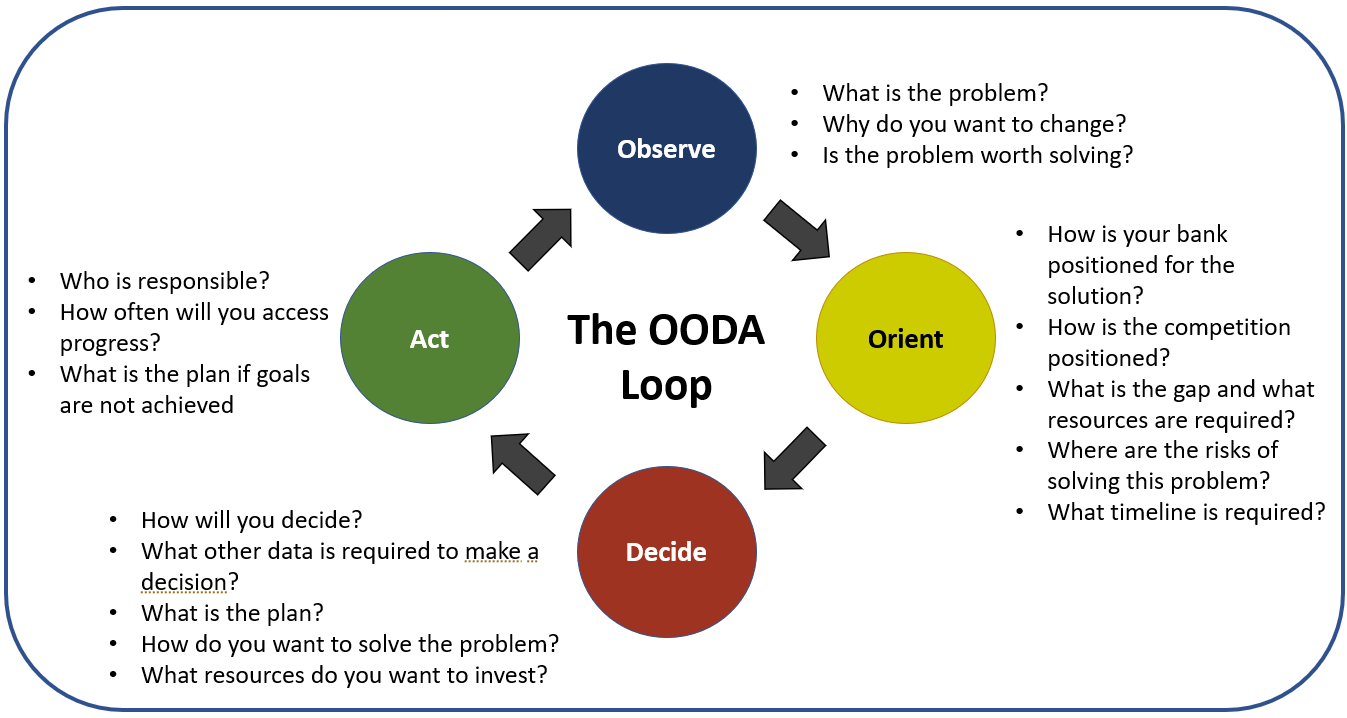 Observe: A good banker can look at a situation, be it rising rates, changing payment channels, deteriorating credit, or the threat to overdraft fees, and can articulate the challenge. Proper observation starts by looking at the available data and then being able to summarize the challenge considering the physical, emotional, and ethical dimensions of the situation. Good observation requires a succinct articulation of that challenge.

Orient: The ability to orient towards a challenge is the most critical aspect of the OODA Loop. When a bank “orientates,” it has a deep understanding of its current situation. It understands its strengths and weaknesses. The bank knows its brand plus who its customers are and who its customers are not. The management team is briefed on industry trends and has decided its role of where it wants to end up. Most importantly, during the orientation phase, assumptions are challenged to see if they are still valid. An effective orientation is when a bank can articulate the gap between where it is now and where it wants to be along various dimensions.

Decide: The decision stage is articulating a plan to meet the challenge. It is a set of strategies and tactics that lead to ending up in the more idealized state. Provided the bank has the time, it is essential to brainstorm the top solutions to the problem and lay them out to be analyzed. Once the universe of solutions is known, bankers can now optimize the path according to the factors that are important at the time.

Act: Acting is the execution of that decision. It is the ability to prioritize and allocate the proper resources – time and capital – to achieve the objective.

Nesting and linking OODA Loops are where this concept becomes powerful.

Since the OODA Loop keeps running until a problem is solved, it is a continuous iteration cycle. OODA Loops can be independent and stand-alone such as an OODA Loop to solve a credit problem, or there could be a series of loops that influence each other that can be connected. Bank marketing is a good example where you might have various OODA loops to solve different marketing problems during a campaign or product launch.

More importantly, OODA Loops can be strung together as individual tactics that roll up to a larger short- and long-term strategy. Some OODA Loops, such as daily loan sale challenges, will be short-term. However, these short-term decisions influence monthly, quarterly, or annual production issues.  Thus, your daily sales goal challenges are part of monthly, quarterly, and annual sales challenges. Improvement and interaction in a daily Loop can compound to impact larger goals. The Power of OODA Loops For Faster Decision Making

While the OODA loop process isn’t ground shaking, it is the codification of the system where the beauty lies. Teaching everyone on the team the OODA Loop provides a continuously improving process that allows leaders to deal with more uncertainty and quickly make decisions based on imperfect information.

The OODA Loop was critical to come up with solutions during the pandemic, such as the work from home structure, the Paycheck Protection Program, and dealing with automating credit forbearances.

As you use the OODA Loop, you learn that investments that make you more flexible have additional value. For example, banks that had a business process automation application in place prior to the pandemic such as Service Now or Salesforce had the ability to quickly create a new workflow on the fly and adapt to a changing environment.

A system like Service Now is often purchased by banks to handle IT ticketing, but it can also be used to automate employee onboarding, content management, customer service, or thousands of other tasks. The same goes for Salesforce. While most banks purchased the technology for a CRM system, those that had it were able to roll out chatbots, scheduling, account opening, or thousands of other processes. These systems not only solve specific problems but also create future optionality. The point here is certain investments like technology, training, and process improvement provide a greater array of tools to make the OODA loop go faster. More solution options can result in faster and more optimal decisions.

More Brilliance of the OODA Loop

While simple in concept, the reality is few banks and few organizations use the OODA Loop on a formal basis. Banks often get to the orientation phase and are riddled with confirmation bias and assume that the status quo will be maintained. They rationalize away their challenges, cherry-picking data and relying on other banks to lead the way so they can “be a fast follower.”

The problem is, by the time they complete the OODA Loop, the challenge has changed again, and the lead between their competitors and themselves is now insurmountable.

To prevent this gap, there are several other concepts that Boyd preached that underlie the execution of the OODA Loop.

Uncertainty and Opportunity: Boyd’s work was born out of a landscape of uncertainty. For Boyd, it started with an air-to-air dog fight but then was articulated into a whole battle and then a war. Whatever the case, Boyd sought out areas with uncertainty because he knew that the OODA Loop and supporting concepts provided an advantage against competition.

For banks, the changing face of work, the pressure on overdraft fees, the pressure on interchange fees, the drive for efficiency, changing credit, interest rates, and the search for talent all create bountiful opportunities for banks to employ the OODA Loop to gain an advantage.

Culture: While the OODA Loops work the easiest for an individual decision, when it comes to a team, the more trust a team has, the better. As it pertains to the OODA Loop, building a solid culture means having shared values, transparency, accountability, and having enough time together where the team trusts each other.

Mental Models and Diversification: Experience in banking is valuable because it gives bankers a playbook to use when there is a credit shock, interest rates rise, deposits are no longer plentiful, or fees go away. Having mental models around specific problems helps speed the OODA Loop.

However, Boyd cautioned that some doctrines or policies have certain biases built-in and limit solutions for no reason. Banks that require “wet signatures” instead of electronic signatures, banks requiring you to be in-person for certain products, or banks with credit limits/signing authority that is not derived from data are all examples of how doctrines and policy get translated into antiquated dogmas.

In addition, to be able to draw on a wide range of mental models, it’s critical to ensure you have diversification of thought injected into the Orientation and Decision phase of the OODA Loop. The more backgrounds and disciplines you can draw from, the better the solution.

Defining “Winning”: Boyd was one of the first military thinkers to consider more than attrition when waging war. Until the Second World War, military victories were defined as who had the most soldiers, civilians, and equipment at the end of the battle. During the Korean War and particularly Vietnam, despite being victorious in battles and having less attrition, the U.S. struggled for victories because it failed to consider other essential factors such as public opinion.

As bankers often define winning by balances, revenue, or profit, this is a critical lesson. However, that may be too narrow of a definition. Items like credit/interest rate risk, the bank’s brand, employee morale might need to be taken into account during the OODA Loop to arrive at the optimal solution.

Processing Faster and Breaking Your Competitor’s Loop: One precept of the OODA Loop states that individuals or banks that can go through successful, consecutive OODA Loops faster than their competitors will win the conflict. This also means that anything you can redo to “reset” or “break” your competitor’s loop will also aid you in processing relatively faster. Coming out with a new payments product may not only help you complete your loop but may cause confusion and your competitor bank to reorientate themselves and cause a restart of their problem-solving loop.

The OODA loop makes explicit decision processes that are likely implicit at your bank. The methodology allows bankers to synthesize crucial information and analyze it within the parameters of the bank’s objectives and capabilities. By following each step in the OODA Loop and using feedback plus data to assess, it’s possible to identify systemic bottlenecks, develop effective strategies, and implement optimal solutions on a more competitive timeline.

Training your board and management team on the OODA Loop is a start to being able to leverage this framework. Next, banks should start small solving everyday problems using this methodology and then build by linking a series of OODA Loop activities into a greater effort.

Using the OODA Loop also takes time, at least to start. A leader should be deliberate about scheduling and conducting the critical orientation phase. Good answers begin with good questions. Leaders should be sensitive about any assumptions that are used and be diligent both in the collection of data and the utilization of Sacred Cows such as those stemming from tradition, compliance, or how other banks have done it.

If your bank is looking for a way to speed up decisions and innovation, the OODA Loop is a tool that should be considered. Top-performing banks will often have fast OODA Loop cycles, while underperforming banks will have loops that are often slowed by lack of creativity, process bottlenecks, and devoid of process improvement.

If you are not using the OODA Loop already, try it out and practice it a few times. The more you use it, the better that you will get at it. Soon, you will not only be making faster and more optimal decisions but will find that your decision-making will be a competitive advantage.